Cost: $62 for Olympia Senior Center members, $68 for the general public
This includes handouts created by Glen.

Who: Persons of any age may register and participate 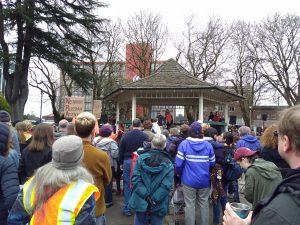 This workshop series is intended for people who want to learn about nonviolence as both ethical and practical, and people who want to learn how to organize effectively to create good solutions for our local community, our nation, and our world. This workshop series is an excellent starting point for novices, and it also provides much more insights and skills for people who are already experienced. The workshops involve thinking and talking, not physical activities.

The six workshops are:
1. “The Power and Practicality of Nonviolence- What is Nonviolence?”
2. “How to Strategize and Organize Effective Movements.”
3. “Organizing 101: Basic Nuts and Bolts of Grassroots Organizing.”
4. “Using three different models to devise strategies to make progress on an issue YOU care about.”
5. “Empowering the Progressive Movement.”
6. “How to Get Your Message Out to the General Public.”

Glen started volunteering for peace and social justice movements in the 1960’s and never stopped. For half a century he has been volunteering with a variety of non-profit organizations and especially working to organize strategically effective nonviolent grassroots movements. Glen has produced and hosted monthly TV programs on TCTV in Thurston County since February 1987. He writes extensively and posts information about a wide variety of issues to his blog, www.parallaxperspectives.org

Receive notifications of our Actions by email, by text or on your personal news page.

Volunteer to Help Out

Gain experience in WordPress. Write articles on topics of interest to you. Scout for interesting events or organizations. Do public outreach.

We have a range of ways you can plug in.